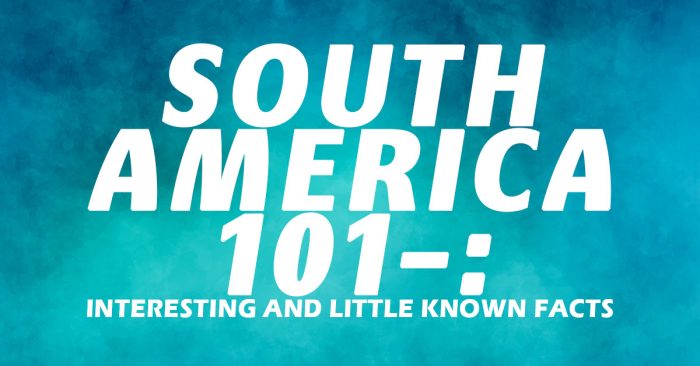 South America is full of surprises, not the least of which is its location. Many of us believe South America is directly South of North America and the United States, when in fact it is further to the Southeast. Most, for example, don’t realize that Cleveland, Ohio is further west than most of South America. That’s just the start of some interesting and little known facts about South America.

With over 300 languages spoken, South America is a large and diverse continent that has some of the planet’s driest areas, the tallest mountains, the largest rain forests and the longest river. It is worth knowing more about.

Car Doors: Who Would Have Thought There Were So Many Choices?

Car Doors: Who Would Have Thought There Were So Many Choices?

Simple, cheap, Easy Ways to Improve the Safety and Security of Your Home

How Much Does It Cost To…

Know What You Are Saying No To

Imagine If There Was No Such Thing As Life Insurance

What Becomes of Your Recycled Motor Oil?

The Good, Bad, and Ugly of Living in an Association Managed Community

One for the Record: Vinyl Records Revisited

Why “Targeting” Prospects is so Important in Business Advertising